I’ve been seeing articles about smart power meters causing health problems for people. There is a smart meter at my office and one at my home, so I decided to do a little snooping around to see what the deal is regarding smart meters.

Looking at the face of my smart meter, there is an “FCC ID” number. See the following picture. 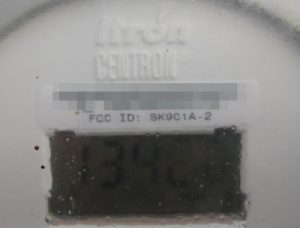 The cheap plastic housing is cloudy from years of sun and rain (and from the looks if it, sand storms). To get a good view of the text inside, just spit on it! The liquid makes the plastic transparent again. Apologies for posting a picture of my spit, but we have to adapt!

You’ll see that the FCC ID of this meter is SK9C1A-2. That’s a number assigned to the manufacturer by the FCC to track the product and its test report. These smart meters have to be tested under the Code of Federal Regulations, Title 47, Part 15. Not fun reading, but it’s pretty straightforward. Smart meters are unintentional and intentional radiators, meaning that they inadvertently radiate electronic noise, and also intentionally transmit radio signals. The manufacturer must ensure that the product complies with the radiation limits in Part 15.

To do that, the manufacturer contracts with a testing lab which measures the emissions of the product, producing a test report that is submitted to the FCC for approval. That test report is most often available online for public viewing at the FCC’s web site. A sample of the form appears below with the FCC ID entered: 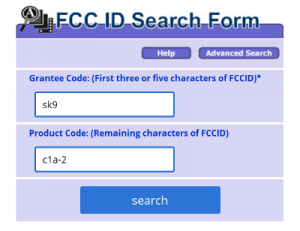 (I don’t know why you have to split the ID into two sections, but I’m sure some government IT geek has enhanced job security as a result.)

These documents have all sorts of interesting information, from pictures to a full engineering description of how the product works.

The table below summarizes the important details from the OPERATIONAL DESCRIPTION link:

For my smart meter, the document tells me that it is a transmit-only device, and the table says it sends data typically once a second, depending on the model and mode of operation. When it sends data, the radio transmission is 7.4 milliseconds maximum, with a power output of 4.5dBm (which is equivalent to 0.0028 watts).

These numbers are important because they tell us the average power that our bodies and puppies are being exposed to. From the times we determine that the duty cycle, or percentage of transmit time, is 7.4 milliseconds / 1 second = 0.0074 = 0.74%. We multiply that by the peak power to determine the average power over the one second transmission interval, or 0.0074 * 0.0028 watts = 20.7 micro watts.

Having worked with radio systems for most of my life, it appears that the smart meters produce a minuscule fraction of the radio power of other more common electronic transmitting devices. It produces this power in small bursts, about once a second, as I measured below: 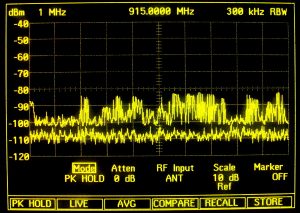 This image shows this smart meter transmitting on a frequency around 915MHz. The meter uses what’s called Spread Spectrum technology, meaning that it spreads out the transmission over a wide bandwidth, for technical reasons. The lower trace at about -110dBm shows the “noise floor”, that being the signal level detected when nothing is being received. The busier trace above shows the various transmissions over the course of several minutes. The vertical scale is not calibrated here as I was only using a wire antenna, but this graph shows the transmissions occurring as time goes by.

As I was sniffing out the smart meter transmissions, I observed the output of a nearby cell tower at about 884MHz. Take a look: 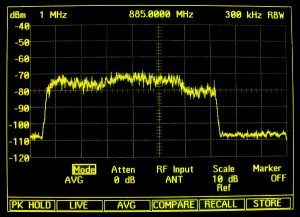 I have a hard time believing that anyone could determine that they are sensitive to smart meter radiation, especially since we are bombarded by much higher levels of radiation from other sources, 24/7. I don’t doubt that some people are hypersensitive to RF radiation, but identifying the source would be difficult.

It would have been nice to compare the smart meter’s radiation to that of WiFi, but, alas, I don’t use WiFi because it is insecure! Neither should you.

When reading articles about the safety of radio devices such as cell phones, the science dorks use the phrase, “ionizing radiation.” That means radio frequency energy strong enough to knock an electron off an atom, creating an ion, which can then wreak havoc on other molecules, such as DNA. That third eye is fun at parties, but it wasn’t in your original blueprints.

The science dorks drone on about ionizing radiation, noting that if the radiation is not that strong, then the chances of cellular damage are greatly diminished.

However, what they don’t tell you is that your body is not a static bag of chemical soup just sitting on the couch waiting for an ionizing radio frequency photon (well, not most of us anyway). Our bodies are in continuous motion, with chemical reactions occurring continuously, a trillion times per second. We don’t fear radio frequency energy strong enough to create ions, we fear radio frequency energy strong enough to simply bias the results of normal chemical reactions. That’s a much lower threshold of power, and one that is virtually impossible to quantify. The reaction? Silence of the Dorks.

As a result, I stay away from radio frequency energy as much as possible. You won’t find me carrying a cell phone in my pocket next to, let’s say, sensitive organs. You won’t find me with a cell phone plastered to my skull for hours a day. You won’t find me living below high voltage power lines. It doesn’t matter what the science dorks say. I’ve experienced RF burns before, and I cannot believe that lower levels would have zero effect on my body.

So, dump that on your favorite science dork. Now I have some more smart meters to spit on!