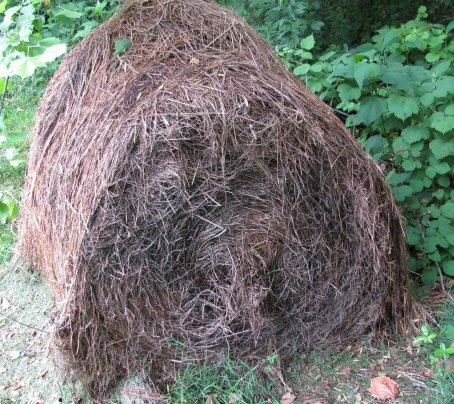 I have a buddy who put me onto permaculture, or sustainable agriculture. In this way of thinking, we try to emulate nature in how it grows plants, and ultimately food for the animal community it supports. You don’t see many tillers and fertilizer spreaders in the forest, do you?

One of the things he does is mulch his garden liberally with hay. Hay is a cheap material which is available just about year round. I buy mine off craigslist in the spring, and it’s generally last year’s first hay cutting that the farmers are trying to get rid of to make space for this year’s first cutting.

He showed me how to apply the hay to the garden. It’s easy! Just spread the hay on the ground until you cannot see the soil. That is, the sun should not touch the soil. The hay layer has to be an inch or more thick to do this.

This has a few benefits.

1. The hay holds moisture in the soil and prevents evaporation.

2. The top few inches of soil remain damp, and stay in the growing game. Dry, caked soil is devoid of worms and other critters, and roots cannot extract nutrients from it.

3. Weeds are suppressed by 90%, saving your energy and back.

Even in areas where there are no current plantings, I cover with hay. This keeps the soil ready for planting. When I move the hay aside in a small spot to plant a seedling or seed, there are sometimes worms on the surface. The entire depth of soil is alive with beneficial creatures.

Sometimes the hay holds too much moisture in the soil. For squash and zucchini, I’ll move the hay back several inches from the root of the mature plant, to avoid fungal disease which is enhanced by too much moisture.

With hay mulch, I water 90% less. This saves energy, water, and time.

And it is wonderful having the upper hand on weeds. I expect the suppression of weeds is caused by 1) lack of sunlight hitting sprouting seedlings, 2) inability for wind borne seed to contact the soil, and 3) inhibition of germination due to the decay process happening right on the surface of the soil. Even perennial weeds that grow back from root systems have difficulty with the hay. And when I find a weed, I just pull it by the roots and lay it over on the hay to become part of my mulch system.

It takes about three months for the hay to decay and become ineffective. But that’s about how long each round of vegetable crop takes to run its course, so I just till under the hay, or add more and plant the next crop.

Over the year, I apply and eventually till under a pretty good lump of hay, which helps the soil structure.

What about the seeds in the hay itself? Hay is just field grass, which has its own share of weeds and grass seed. Those seeds don’t germinate, either, for the same reason dandelion seeds are suppressed. I have seen no new types of weeds in my garden after several years of hay mulching.

Now, you permaculture aficionados may be sputtering a bit. “But. but. Hay is grown using modern agriculture methods that are harmful to the land.” I suppose you are right. A better method would be using the abundant leaves that come down in the fall in this area. No machines required to harvest those! But I started with the hay just as an experiment, and I am reducing the wasted energy of the local farmers just dumping last year’s bales!

Give hay mulching a try! You can buy a few rectangular bales, or find a farmer who can load a 5 foot diameter round bale. Those round bales will mulch 1000- 1500 square feet for a season, and cost $10-$20 if you haul them home.